Everything seems to be about Coronavirus these days. It’s the main topic of conversation in most, if not all of my WhatsApp groups, with members sharing links, information, myths and fake news alike on the virus. News reports are constantly updating on the ever-rising numbers, the new countries where cases have been detected and ways to protect oneself. The World Health Organisation (WHO) has declared the outbreak a global pandemic with more than 118,000 cases in 114 countries and 4,291 deaths.

The world seems to be reacting to this virus with a code red mentality. Masks and sanitizer seem to be running out in many places around the world. Large gatherings have and continue to be cancelled, including the annual Commission on the Status of Women (CSW) that takes place in March every year in New York since it was founded in 1946 and had its first session in 1947. It was in 1987 that the decision was made for it to be held annually rather than biannually. As far as I know, CSW has been held without fail since then – except for now – due to fears of the Coronavirus.

Aside from large gatherings and conferences, schools have been shut down, as have places of worship, including Mecca – which was temporarily cleared of all pilgrims – again something that I believe is unprecedented. Global stocks fell significantly, people shifted their habits (including adopting non-physical greetings, isolating themselves, cancelling trips…). Someone had pointed out that it would be great if we could adapt our lives to climate change the way we are to this virus – which is equally wreaking havoc around the world. Do we realize that we lost over one billion animals in the fires in Australia? One billion. Other natural disasters are disrupting peoples lives and causing death and destruction.

Is it just me, or does it feel like the end of times? What lessons do we walk away with? Coronavirus has humbled us as human beings. People had planned their calendars around the CSW – around Hajj – made so many plans – only for those plans to be halted as the virus spreads around the world. Have we made peace with ourselves, with those around us? Have we pulled our loved ones close? Told them everything we’ve put off telling them? Have we done the things that we’ve dreamed of doing but keep putting off for tomorrow? And the day after tomorrow, and the day after that?

Without sounding alarmist, it seems to me we’re on borrowed time. With climate change, and rising mental health issues and Coronavirus as well as the myriad of crazy things happening in our world, life is fickle. Too fickle for us to be messing around and muddling through life. We have today. Tomorrow is not guaranteed. May we make the most of every waking breath – because the next isn’t promised. And even if it does come, may we live in a world that is full of people loving – their fellow human beings as well as the earth, practising gratitude – consciously and consistently living their best lives – without apologies. 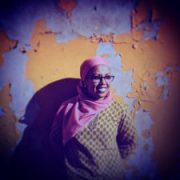 Consent is Really Not Complicated