In 2018, we can confidently say that world over, the feminist resistance was alive! This statement is true when taking stock of the emergence of bold action from various movements.  From #TimesUp, #MeToo and #AidToo that challenged sexual harassment and violence in the entertainment and international development spheres to Ni una Menos and the green wave in Latin America aimed at fighting for reproductive rights and the basic right for abortion, great strides were made.

In Africa, we had massive mobilizations from South Africa’s TotalShutdown movement dubbed ” My Body not your Crime Sceneâ€ aimed at denouncing all forms of violence against women. Then came the unprecedented gains for feminism in political and public sector representation in Ethiopia where women were elected to strategic and prolific offices such as the presidency, judiciary and the cabinet among other spheres as well as the  Women’s March in Uganda.

These wins such as those in Ethiopia provided an opportunity to ensure that women and girls who are half the population are equally represented in leadership and decision making. In addition the mobilizations specially provided platforms, space and amplified the voice in protesting against the violence women suffer on a daily basis; reclaiming the power to challenge oppressive systems and policies and advocating for keeping institutions and states accountable.

We feminists do proclaim that the personal is political, which is difficult to articulate when sometimes discussions are sanitized and devoid of political nuance hence the resistance and mobilization. However, even in the midst of these moments we celebrate, patriarchy remained alive and well and it kept resurfacing with its deep-rooted fangs.

Working in the international development space and especially on women’s rights, we are reminded of this on a daily basis. This is illustrated by the fact that 1 in 3 women will experience violence in her lifetime and over 200 million women who need contraception do not have access due to unmet need.
We also saw continued resolve by governments to stifle the voices of feminist activists and women who stood up to challenge the status quo such as Dr. Stella Nyanzi who remains in prison to date on charges of offensive communication over a Facebook poem about Uganda’s president Yoweri Museveni and Diane Rwigara ,a former presidential aspirant in Rwanda who was acquitted together with her mother Adeline after more than a year in prison on charges of inciting insurrection.

In other instances, we witnessed the rights of women and girls being infringed on and some battles that we thought were long won by feminist activists made a come back. In Kenya, my own country, the government put a ban on Marie Stopes, an international organization that provides contraception and safe abortion, on claims that their clinics had been providing abortions outside the provisions of the constitution.

In Sierra Leone, Tanzania and Mozambique, there were policy directives to criminalize teenage pregnancy, which does not just infringe on girls rights to education but also violates their sexual and reproductive health and rights. The same governments â€˜banning teenage pregnancy’ have not eliminated child, early and forced marriage and do not provide comprehensive sexuality education. We also know too well that girls’ rights to access contraception is heavily stigmatized even when provided for in the law. These are just a few examples of what women and girls grapple with on a daily basis and some of the frontiers that patriarchy was highly visible.
These battles in Africa are not happening in isolation of other global battles. For instance in the United States, where the current president has outrightly and openly expressed racist, homophobic and misogynistic sentiments, women from marginalized communities (Muslim, indigenous, Latina and Black communities) continue to fight. The contestations in the United States have a ripple effect, whether it is negative like the Global Gag Rule or women and minorities winning seats in Congress.

To me, these pushbacks illustrate the fact that even though the fight goes on, our feminist fighter gloves are also on and we shall not relent. Because still she rises, and when she does, the world better get ready for the fight we shall put up.
Now 2019 is here , the very year we will mark 25 years since women and activists gathered in Cairo for the International Conference on Population and Development. As we look back on the last 25 years, we will have some concrete wins, contested gains and losses that we must continue to work on to turn them into wins. So as the backlash comes and mounts, it is also the most opportune to reclaim  rights hard fought for by those who came before us.

In 2019, will you join us to dismantles patriarchy? 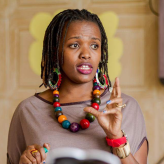 You Have Reached the Women