Radicalisation and violent extremism remains a significant threat to many African countries. With a youth bulge demanding accountability and for those in power to address historical grievances and a lack of economic opportunities, extremist ideologies continue to flourish. Radicalisation is defined as a process by which an individual or a group adopts increasingly extreme political, social or religious ideals and aspirations that reject or undermine the status quo, or contemporary ideas and expressions of freedom of choice. It can be both violent and nonviolent.

While actions of violent extremist groups are not new on the continent, the globalised power and systems of oppression have grown alongside well-connected, extremist groups that often take advantage of the very citizens in whose interests they claim to fight. At the turn of the millennium, the US exported war on terror, subcontracting the war to big men and regional “allies”to pursue groups like Al Shabaab in the Horn of Africa. As the countries militarised, the radicalisation also grew, posing significant harm to many lives in the region.   Notable being Al Shabaab attacks on Uganda in 2010, Westgate mall in Nairobi and  one of the deadliest terrorist attacks in Kenya at  Garissa University College, took hundreds of lives  and many were injured.

Five years after Westgate, Al-Shabaab is weakened but not yet defeated https://t.co/pOWOO7gqr0 #WestgateMall #Alshabaab pic.twitter.com/ykjqBXGVyQ

With this came the stereotyping of violent extremism as almost inherently islamist bringing up new ways of discrimination against muslim populations. However East African groups like Lord’s Resistance Army (LRA) in Uganda, DRC and Central African Republic and others expose this fallacy. While Eastern African countries still grapple with islamist radicalisation,  a narrow fixation on this kind only allows blatant abuse of muslim communities in the region as state machinery targets them in the war on terror.

Recently at a meeting on media and violent extremism in Nairobi hosted by DW Akademie, I met Dr. Fatuma Ahmed Ali who is an Associate Professor of International Relations at the United States International University in Nairobi. She is also a Visiting Faculty at the Universitat Jaume I in Spain. Dr. Fatuma who described herself as an islamic feminist drew my attention to her recent research titled  Understanding the role of Gender Relations in Radicalising and Recruiting Young Muslim Women in Higher Learning Institutions in Kenya.

Dr. Ahmed Ali embarked on the research to look at why women from less economically vulnerable backgrounds, particularly female students are recruited by violent extremist groups. This followed a period where in 2015 Kenya witnessed a process of female radicalisation and recruitment by violent extremist organisations, particularly by Al-Shabaab and Islamic State in Iraq and Syria (ISIS). In one incident, Kenyan authorities  arrested three female university students near the border with Somalia. Beside these publicly known stories there’s unreported cases of mysterious disappearances of young educated women who were said to be radicalised and may have joined these groups, shifting focus away from illiterate to the literate and from male to female recruits.

I spoke to Dr. Ahmed Ali to expound more on her feminist work and the research.

A: Islamic feminism is real for me because issues of equality and empowerment are very contextual depending on the culture where you come from. We have had a long debate on whether there’s African Feminism and whether it has anything to do with western feminism. So for Muslim women we know that our way of life is ideologically and theologically feministic and we use it to promoting equality. Remember the first person who converted to Islam was a woman. In every society, there’s a religion and in every religion there’s a culture and all cultures are very patriarchal and are subject to interpretation. Even in Islam we see patriarchal interpretation from men’s perspective and that’s why we have all this assumption about women. What Muslim women are trying to do is to interpret, do humanistic exercise, interpret the Quran and understand what was the real essence and role of women in Islam because women had a lot of space. Islam promotes equality in inheritance, even in marriage – what we call bride price today, women were the ones who were deciding. What islamic women are trying do is reclaiming their rights in the society but using the islamic framework because that’s where they have to demand their rights from.

Q: As a muslim woman and as an African woman, how do you navigate the various identities in your feminism?

A: I am a Muslim woman, I am African and I am also a Somali woman. There are things that are not islamic but in my culture. For instance Female Genital Mutilation has nothing to do with Islam; it is more of a culture. What women are doing is use islamic identity to fight and move away from these kinds of practices. Sometimes it is vice versa. There are certain norms and issues in the religion that we approach   from our cultural standpoint, use the African culture to navigate through. For instance about dressing norms, in the Somali culture our traditional dress is very transparent, because we live in the Horn of Africa and it is very hot. This Hijab and Buibui (loose gown full body covering) is actually more of Arabic and interpretation of how a muslim woman should be in that culture. You see women try to navigate, to fit into the traditional dressing while preserving ideas of dignity.

Q: As an academic specialising in gender and conflict, what is happening in the Eastern African region regarding women and violent extremism?

A: Most extremist groups are realising that it has become a lot more difficult to navigate because of increased scrutiny, countries are collaborating more and there’s a lot of securitisation in the huge global war on terror. So what they are falling back on is to tap into women’s roles and relations. They find it is easier to recruit women because up to now there’s still this idea that women cannot be combative. Also the positioning of women as sisters, wives and widows has totally sealed women as victims so no one will ever think of women as perpetrators. We imagine them only as victims. In most societies where people have tried to prevent and counter violent extremism, you will find women have been at the forefront because of the impact it has had on them and they feel the need to do something about it and because of the burden of care society puts on them. This is not to say they aren’t victims but there’s a disparity in recognising women’s diverse roles when it comes to fighting in combat situations. They are very important actors.

Q: When we talk about violent extremism, often many point to poverty as a cause. In your research you bring in new nuances to this phenomenon. What are the current dynamics?

A: Violent extremism has various dynamics and radicalisation is a gradual process of change. Whoever is radicalising is always trying to find new ways. Ten years ago, the economic aspects were very crucial, especially for boys. Now there is more of a mixture of factors that allow radicalism to flourish. It is now for more personal, romantic ideas, and emotional gaps like having companionship, fulfilling certain expectations in society. That’s why in the past we have not been able to come up with very good strategies because we are stuck with old kind of thinking and these organisations are always two steps ahead of us. By the time we realise oops they have just taken girls from universities under our watch because we thought these girls are educated, they come from good families and why would they go to these groups. But the groups find loopholes and they package their messages to fit their interest.

Q: What are the top three stereotypes about women and violent extremism?

A: One, all women are victims. Secondly, women know nothing, they are not involved, they have no knowledge. Thirdly, women are closed in their homes especially when it comes to muslim societies. It is imagined that (Muslim) women are conservative, that they don’t interact when in reality most young girls are being radicalised through social media. The narrow description of public sphere for women leaves a lot of room for women and girls to fall into the hands of these groups.

Q: What should be done?

A: Primary and evidence-based research is needed because the lack of data in the area makes it difficult to know trends and respond to the issue. We are unable to know how many women and girls have disappeared and how many have returned.   This is the kind of data we need in order to understand the seriousness and magnitude of the problem.

In her research, Dr. Ali found that recruiters often take advantage of young women’s lower level of religious literacy and use patriarchal constructs in their recruitment narrative by manipulating marriage as a Utopian promise to lure young women. Marriage was a big pull factor because of religious ideological narratives, patriarchal constructs around it and young Muslim women in universities were often subjected to a lot of peer, cultural and social pressure to get married.

Dr. Ali says the strong patriarchal systems where muslim girls are dominated largely by the men in their life and from a young age, “inculcated into them that a man is a protector, a provider and a leader” make it possible for them to believe this theory will be realised once recruiters approach them. Many of them thought having education delays marriage and this created a sense of urgency and obsession that is taken of advantage of. Sometimes the recruited are promised money and better living conditions for their families. Others were promised to away from current lives as an escape to freedom and independence- the search for independence stems from from being supervised and policed in most social aspects.

The research also showed young women were a good target because often unlike their male counterparts they are more likely to recruit more of their peers and join as a group to enjoy the “new found freedom.”

The role of social media, especially WhatsApp, was key in recruiting young educated women in Kenya. Through WhatsApp a random number can start messaging and at first pose as harmless persons looking for friendship. The conversations later on intensify once the woman starts developing an interest in her new suitor. Slowly, the recruiter changes the tempo of the conversation to more serious topics like religion.

Due to the predominant tendency to view Muslim women as more passive, conservative and inactive in extremism rather than just as active as their male counterparts, Dr. Ahmed Ali says there has been limited research on the phenomenon. The exploitation of gender roles and relations as a strategy by violent extremists is reality that needs more attention beyond the usual narratives of economic stress, disgruntled youth as push factors for radicalisation in the region. 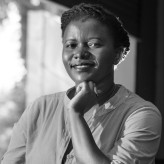 Mother says there are locked rooms inside all women.*

Feminists, Let's Let Each Other Be.

0
Rosebell Kagumire October 4, 2018
No Comments Yet