Have you heard of Jose Garcia?
Garcia, a 15 year old high school student in Miami, shot to Instagram fame in early 2015 when his #realmensupportwomen hit the web, calling for men and boys to carry tampons and sanitary pads to help out the ladies in their lives — and told women they can ask for a pad or tampon anytime. “We should all help each other out like this, so you don’t have to thank me at all,” Garcia said in his post. 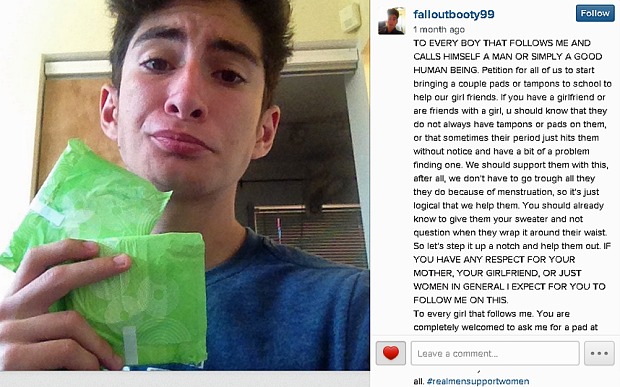 Have you heard of Chance Ward?
Ward, a critical theory and social justice student in Los Angeles, wrote a spirited Facebook post in March 2015 telling men to “keep your menstruating friends in mind.” Like Garcia, Ward encouraged men to go a step beyond just quietly ignoring the fact that women menstruate and keep supplies on hand at home in case a guest needs emergency feminine protection. And men shouldn’t be afraid to approach the topic, he added, because periods are nothing to feel shame about. “Like why? Y’all know literally like half this world goes through this?” he said.
Have you heard of Arunachalam Muruganantham?
Muruganantham was moved to action after discovering his wife collecting filthy rags and newspaper to use during her menstrual period because commercially produced sanitary towels were too expensive. Troubled by this, he started designing experimental pads for his wife and sisters to test. Eventually, they stopped co-operating with him and refused to be the test subjects for his innovations. He started testing his inventions himself, using a bladder with animal blood, and two years later, developed a low-cost sanitary pad making machine which can manufacture sanitary pads for less than a third of the cost of commercial pads. These have been installed in 23 of the 29 states of India, and the social enterprise is expecting to expand the production of these machines to 106 nations. Muruganantham is known globally as India’s “menstrual man”.
All three men have received massive recognition and acclaim for their actions. Since his original post, Garcia’s selfie holding two sanitary pads has been liked by over 23,300 people. Ward’s post went viral, with more than 40,000 likes and reactions. Women and girls replied to the post, calling Ward an MVP, a gift to the world and a hero.  Muruganantham’s TED talk from 2012 has had 1,037,776 total views at the time of publishing this piecel.  In 2014, TIME magazine placed him  in its list of 100 Most Influential People in the World and in 2016, he was awarded the prestigious Padma Shri by Government of India. Yet all three have also received a fair amount of criticism, with men and women alike questioning their motives and sexual orientation purely on the basis of these actions.
What do you think – would the situation and response be any different if men were the ones to menstruate? Would women be equally recognized, rewarded and reviled if they researched, invented and carried sanitary solutions for men? Would sanitary pads and tampons be taxed  as ” luxury itemsâ€, as they are in the United States of America, the United Kingdom and Australia, among others?
In 1978, the inimitable Gloria Steinem published an essay for Ms. Magazine titled ” If Men Could Menstruateâ€. ” The answer is clearâ€, she wrote. ” Menstruation would become an enviable, boast-worthy, masculine event: Men would brag about how long and how much. Boys would mark the onset of menses, that longed-for proof of manhood, with religious ritual and stag parties. Congress would fund a National Institute of Dysmenorrhea to help stamp out monthly discomfortsâ€. Nearly 40 years later, Steinem’s words are prophetic. In 2015, WaterAid launched the ” If Men Had Periodsâ€ campaign to highlight that 1.25 billion women around the world do not have access to a toilet during their periods. WaterAid asked 2000 people how they thought the world would differ if men had periods – and the answers presented a world far removed from the one we occupy. ” If men had periods they would be considered a sign of virility, men would brag about them on Facebook,  #imonmyperiod  would trend regularly on twitter, and  #manpon  adverts would be fronted by celebritiesâ€ reads the introduction to the three YouTube videos developed to front the campaign. “Female representation in politics in many parts of the world is still low, so perhaps if men had periods this issue would get the attention that it deserves”, they conclude in their press release for the same campaign.

Both Steinem’s satirical piece and the WaterAid videos draw us further into an important and for some, uncomfortable, discussion. Across the world, girls miss school, women lose employment opportunities, and myths and misconceptions about menstruation being impure, contaminating, and unhygenic flourish. Certainly it can be unhygenic – if, like Muruganatham’s wife, girls and women are forced to use and reuse dirty rags due to the taboo around the subject of menstruation and the cost of sanitary products – but there is nothing unhygenic about menstruating  in and of itself itself. A tad under 50% of the world’s population will menstruate – in fact, back of the envelope calculations suggest over 330 million women around the world are menstruating at any given time. Yet the typical view we take of menstruation is that it lies purely and securely in the domain of the woman, with any man treading close to be applauded by some and reviled by others, and may feel the need to apologise for discussing menstruation in public, as occurred on the Oprah Winfrey show.
Are things changing? I believe slowly but surely they are. The actions of menstrual men like Garcia, Ward and Muruganantham, make us face up to our prejudices about menstruation, force important discussions and value clarifications, and set the stage for change. However, for as long as we  view those brave men who discuss and support menstruation as heros, saviours or perverts, work remains to be done. It is only when their actions, and the actions of men and women like them, are viewed as routine and normal that we can say true change has occurred. Period.

Why i do what i do

Social construction of roles - A brief reflection (by Daniel Hailu)