She sat in the corner, on the small wooden chair that steadily held her weight in life, and would be kicked out from under her heavy frame welcoming her to the mysterious land of the dead. This small wooden chair that had been a participant in so many of the events leading up to this final performance. She was bowing out of stage. She had given it her best. Perhaps not her all, many would say she had caved in, shamelessly shared a bed with cowardice and that is why she had embraced the rope. But many did not understand her struggle, to understand it would be to walk her journey.

She sat on the chair, pensively, quietly, reserved. She couldn’t quite describe what she felt. The house was quiet. Mtumwa had gone to school. He had given her a tight hug, and held her face close to his in those tiny six year old hands. As if he understood final goodbyes. As if, by some miracle, his mother’s pain was beckoning him, and he could stroke it with his little hands and blow it away like one blows a kiss. Then the wind would carry the pain, that grey ball of sadness, pain, despair, shame, hopelessness and worthlessness across the compound. It would be carried, as it struggled to get back to her, over the trees, over the hills, over the tall buildings, over the little shacks, far away into the horizon. It would disappear and she would be free, saved by the light that came out of her son’s hands and the warmth of his hug.

But she couldn’t fathom the idea of the ugly, grey, demented ball of sadness landing on another person. A mother struggling with first time motherhood; a young woman who despises her body; a teenager bullied because of the clothes she lacks or the fact that the boy in the next class, the one she sent pictures on Snap Chat, made her budding breasts and shy maturing frame the trending news of the week; a young woman struggling with the aftermath of sexual assault.

She could not understand why the darkness refused to leave her. Sure, she had had her fair share of trouble in life, but she had not seen war, or famine, or abandonment. She felt like she had no right to feel sadness in this way. Yet every passing thought seemed like death was calling, this final rest that would take her to a place of peace and quiet. She was convinced Mtumwa would be better off without a sad demented bundle of grief for a mother. She was certain M’mzinza would be happier with a younger, bubblier woman as a wife. She told herself that the world would not stop because one sad insignificant woman had chosen to force her way out and stop the clock that was her life. She had thought about it endlessly, justifying and planning. She was convinced they would be better off without her.

So that beautiful Wednesday morning, with the birds chirping and the cars hooting; the merchants selling their wares mindlessly and the women chatting noisily. The children running outside happily and the Kikuyu Gospel tunes booming in her neighbour’s house drifting in through her open window, she made up her mind.

Her movements were mechanical, robotic even. She still stared ahead, but her expression was eerily blank. She stood on me. The chair that had bore witness to her life, to her giving life, and would now be a character in this script that was coming to a sad abrupt end. She took a rope from the corner of the house. It was a sisal rope. Those they sometimes use to tie carton boxes when the shopping done is too heavy to be carried in a plastic bag. I observed as she tested its strength by pulling both hands. She tested its length. She looped it on to the thick plank of wood that ran across the ceiling. They would sometimes hang Mtumwa’s wet uniform there close to the bulb so it would dry up faster. She looped it a second time, to make sure it would hold her weight. The same way she had tried holding on to dear life.

She stepped on me. At that moment, I wished I had a voice. I remembered one of the stories from the Bible that the Great Prophet had shared one day. When Yahweh gave a donkey the ability to speak. I wished I was alive. She dragged me across the floor. As if I was suddenly too heavy to be lifted. I hoped the screeching noise I made would awaken her from the stupor she was in. Distract her from the darkness and cause her to hold on to the only noise that emanated from her single room that told her she was still alive.

She got down and took a bible from the small stack of books next to the bed. The stack consisted of romance novels, some books on plumbing belonging to M’mzanzi and a worn out alphabet chart that Mtumwa used to sing his ABCs.

She opened it, slowly, and read a verse out loud.

As for man, his days are like grass; as a flower of the field, so he flourishes. For the wind passes over it, and it is gone. And its place remembers it no more
Psalm 103:15

She sat for five minutes as if she were meditating on the words. Then she left the Good Book lying on the table and got back to her mission.

She tied a noose, tightening the knot. She seemed to struggle with getting it past her big afro hair, but eventually, it slipped down to her neck and stayed there like an odd necklace.

What happened next can either be attributed to near perfect timing, or an actual miracle. Maybe the Great Prophet’s prayers permeated our low ceiling and got to the heavens after all. It seemed to happen in slow motion.

My four legs began to creak under the weight of her heavy frame. My left leg, the one that had been reattached after M’mzinza’s fit of anger some years back began to separate itself from the rest of my body. The nail that had been used to reattach the broken leg was bending, slowly. Eight years of service in this place I had called home had taken a toll on me, and the timing was impeccable. My leg snapped before she had finished her countdown. A look of complete bewilderment painted her sweaty, teary face. The element of surprise was not fit for this moment. This moment she so desperately wanted to control. She wanted to take herself out, go out on her own terms. Not to be taken out by an unwitting, unscripted character- a chair.

As I snapped with a loud crack, the rope tightened around her neck. Her legs danced frantically in mid air, her eyes bulged, her hands tried to loosen the rope that was now cutting into her skin. She made strange loud gurgling noises, and a stream of warm urine gushed down her beige pyjama pants.

Then suddenly the rope snapped, and she fell onto the floor. Turns out a sisal rope that has been left out to rot under a dripping sink is not the best tool to facilitate such an exit. She lay on the floor, coughing and struggling to catch her breath. She cried hysterically, loudly, like she was releasing years of pain in fits of loud wailing.

Then slowly, after what seemed like hours, she got up. She picked up my broken pieces; my broken leg lay under the table. She opened the door, the sun was shining and everything outside was business as usual. It was as if the world did not care that she had almost seen death, and she had re-emerged, scarred, but alive. I had served my purpose. I was too old to be reattached and a new chair would take my place. She stood at the door, staring at me, before she went back inside and shut the door.

A few minutes later, I heard music. I heard the sound of a broom sweeping the floor. There was hope. She would live another day. 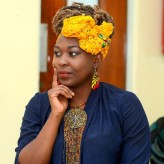 Fem*i*nism  -the case of South Sudan

Overthrow patriarchy and what do you replace it with?