Patriarchy is exhausting, every day feels like and is a battlefield in many ways. Some days I am strong enough to be at the frontline, some days I am just another fighter, and some days I am simply too worn-out to fight back. In South Sudan, I would say for many things we are still at the “awareness-raising” level in our journey to organize and reclaim women’s human rights to be lived realities.

On almost every social issue especially on women and girls’ rights, the wins are small and countable but we celebrate regardless. We celebrate when any perpetrator of sexual and gender-based violence is publicly tried and convicted even when we know deep down that he will be walking on the streets unbothered a few days later. We celebrate when new laws and policies are passed knowing well that there is no political will to see them through.

South Sudanese feminists celebrate these small wins even when we don’t fully feel their impacts at the moment simply because we understand that today’s partial wins or losses are foundational blocks for tomorrow’s feminist wins. There are moments when the feminist success stories are my motivation but most times, it’s the stories of failure that make me wake up re-energized and fired up enough to fight another day.

Living a feminist life is the most radical act and I am constantly inspired by how young South Sudanese girls and women are resisting and actively fighting back against the patriarchy. From the few stories that make it to traditional and digital multimedia platforms, like the story of the 16-year-old Abuk Lual who sued her parents for attempting to forcefully marry her off, Poni Hellen who tried to resist child marriage as a result of unwanted teenage pregnancy at the age of 16, at first failed but re-strategized after giving birth and eventually found her way out of that marriage. Then there’s Kakule and Akuac Ring, all stories of girls and young women actively fighting back against child and forced marriages in a country where 52 percent of girls are married off before their 18th birthday.

On some days, my energy to fight another day is drawn from waking up to stories such as the story of unarmed Rumbek Women who instantly mobilized, disarmed, and beaten up two soldiers who wanted to gang-rape a woman. Watching Aman Bol take to Facebook live and sharing her divorce and the fight for her children’s custody affirms why we must continue. In a country that rewards women for silence and covering up domestic and intimate partner violence, Aman has no idea how many patriarchal barriers she defied by publicly speaking up about what she was going through while it was happening.

Just like the story of Aluel Garang famously known as ‘Aluel Messi’, a footballer who decided to return to playing for her club three months after childbirth. The decision and action caused public outrage as her husband stormed the football match and violently demanded she get off the pitch. This particular story exposed the violence of misogyny and lack of accountability for women’s lives even when a woman is publicly violated. I stan ‘Aluel Messi’ for persisting and not backing off in the face of such public humiliation.

For girls and young women in South Sudan, going out to have a good time, wearing whatever the hell you want unbothered, speaking out and fighting back misogynists off and online, the young women initiating conversations around bride price at their family levels, walking out of abusive marriages, choosing to follow your career, etc. are all radical feminist acts performed every day by girls and young women who don’t even necessarily identify as feminists.

Sometimes it feels like all the awareness-raising, the advocacy, all the ongoing programs on gender, the push for policies and laws on sexual and gender-based violence, and other feminist actions are hitting walls with no major impact, but then I look around and see girls and young women claiming their spaces, fighting for their rights in small and big ways and my heart settles.

Yes, the big feminist wins that are often a result of public outrage and pressure, often leading to State ‘performative’ acts of accountability are important. However, there is so much power in the everyday small radical feminist acts of resistance and pushback. This generation of South Sudanese girls and young women is here to take the liberation of women to the next levels and I am here for it. 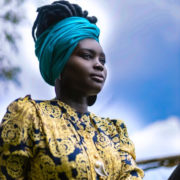