“There is important labour that feminists perform in this country and too often it gets erased when the issues become mainstream. Remember the women who speak before it is acceptable. The women who make it impossible for us to look away.”– Marilyn Kamuru, a feminist and lawyer tweeted on May 30, 2019 as the vigil to remember femicide victims was ongoing in Nairobi. According to Counting Dead Women Kenya, an organization that does the incredibly difficult work of counting and documenting the stories of women killed through violence, 54 Kenyan women have been murdered from January to June this year.

That tweet by Kamuru got me thinking of all the feminist women who have set the pace for change, for transformation and for revolution all over the world only to have their labour erased, their work dumbed down and their sweat and blood disregarded completely in favour of mainstream power. A power that comes in quite literally like a silent thief and runs away with their ideas sensationally and with lots of euphoria.

The term “misogynoir” which means the specific hatred, dislike, distrust, and prejudice directed toward black women was coined by Maya Bailey, an African American feminist, to show the intersectionality of misogyny with race and gender. The term has since gone mainstream and is used by numerous scholars and in mainstream pop culture without her name being cited. As she says in her article titled On misogynoir: citation, erasure, and plagiarism, “We experience, to varying degrees, our contributions being erased, our writing not cited, or our words plagiarized by people who find the word compelling. It is not surprising that misogynoir would be enacted against the Black women who brought the word to public acclaim but it is nonetheless troubling. This is not to say that every time the word is used, our names need to be mentioned, but it does matter that our intellectual interventions are understood in proper context.”

Kenya’s Wangari Maathai was a social, political and environmental activist way before activism was fashionable. Her struggles, her arrests, her labour took long to be recognized and acknowledged but she forcefully pushed for the protection of the environment when the work was unpopular, when the struggle was abhorred, with zero support and backup from the media or the government. Just an African woman working towards climate justice.

Back in March, on International Women’s Day, young feminist women in Kenya commenced a nationwide conversation about the rising cases of femicide. They introduced the conversation on femicide nationally. They researched on the missing gaps in our laws, drafted sound demands to the government, organized non-violent marches in different cities with little resources.

They camped at the Supreme Court, Office of the President and in Parliament to present their memorandum of demands which among others called for the President to declare Violence against women a National Emergency and to develop a National Action Plan to fight violence. The President of Kenya has since given a statement on femicide in Kenya and pledged to adopt some of the demands presented by young feminists in Kenya.

Months down the road, there have been more events organised by mainstream organisations, politicians and different stakeholders concerned about the rising cases of femicide. This is a win for Kenyan women that finally the people in power are centering the conversation on femicide on a bigger platform. However, it’s important not to erase the labour of young feminists even as the conversation on femicide is becoming more mainstream. It is a win that young feminists were able to influence national conversation around an important topic like femicide.

As young women fight for inclusion and representation in different spaces, the danger of their ideas being watered down, erased, invalidated and their labour unrecognized or undervalued by both the media and people in power is a necessary conversation and it must be had. We need to remember that erasure is violence.

We rarely see young women represented in positions of power or where good precedent has been set in setting the stage for national conversation. We need to constantly invite young feminists to all the tables.

The  discussion on strategies for achieving collectivism in the feminist movement is vital. Recognize young women’s labour and their ideas and passion they come with. The space is big enough for all of us without actively pushing to erase the work of brave, young and feminist women.

Nancy Houston Ouya is a young Kenyan lawyer, radical intersectional feminist and activist. She is the co founder of FEMINISTS IN KENYA, a movement of feminist activists who convened a nation wide march on International Women’s Day 2019 against femicide in Kenya. They continue to petition the Kenyan Government to declare Violence against Women a National Emergency. She is passionate about injecting feminist perspectives and values in life and is working to spread feminism nationally through writing and organising. 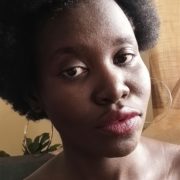 Nancy Houston Ouya is a young Kenyan lawyer, radical intersectional feminist and activist. She is the co founder of FEMINISTS IN KENYA. She is passionate about injecting feminist perspectives and values in life and is working to spread feminism nationally through writing and organising.

Emotional Burden in the Rights Struggle; Self-care Not Optional But a Priority

Confronting the Use of Defamation Suits to Silence Victims of Sexual Abuse.