I wonder though, as a feminist are you always expected to be vocal? It doesn’t seem like an easy way to live life.

That was the concern a friend shared with me a week ago. Although I did not have a fully formed answer to his question, I responded by sharing with him a quote from an article the President of the United States, Barack Obama, wrote recently on feminism in which he shares ” Michelle and I have raised our daughters to speak up when they see a double standard or feel unfairly judged based on their gender or race – or when they notice that happening to someone else.â€
My friend’s provocative question has since then made me reflect a lot about agency, authenticity, acceptance, rejection, fear, courage, losses and gains. My friend’s observation was accurate to the extent that ease of life in most communities has stemmed from maintaining the status quo. It is no surprise then that there are high prices to be paid for being a feminist in highly patriarchal societies, where simply identifying oneself as such makes one vulnerable to rejection, mockery and malice.
” What are you here to learn about?â€ I asked of a man in his late 20s sometime ago at a networking event as our facilitator guided us to get in small groups and ask this of each other. Without missing a beat and an expression filled with disgust, he barked at me ” not feminismâ€! Someone I have never met before those two minutes but who probably knows of my writing and my aspiration for equal rights had in that moment already marginalized 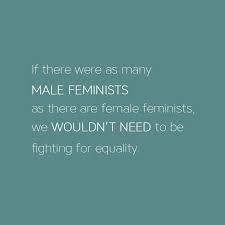 me. A few years back, a guy I was getting to know romantically began to be elusive. Friends who had introduced us, later on share with me that he was getting ” intimidatedâ€ by my feminist writing, according to him. At another point in time, a close friend (who later chose not to be close) dismisses my thoughts with a roll of the eyes, wave of the hand, and an ” ehhh, bakih esua feminist natâ€ (” ehhh, she’s a feministâ€) interjection to a male friend of ours, as I attempted to share my perspective with him on sexually degrading images of women popularized in bar culture. There are many similar instances that are testament to how being vocal on issues of gender inequalities does not equate to an ” easyâ€ life. My friend was right!
Despite all the negative experiences however, I wouldn’t have it any other way for the positive influences on others have far outweighed the negative consequences I have experienced of being vocal. Following a gender equality workshop I delivered a few months ago, an older woman approaches me to share her gratitude at helping her realize how she had been pressuring her daughters to conform to societal expectations of womanhood at a very young age without cultivating their aspirations for education and a career. At another workshop, a few older gentlemen share how they have been blind to inequalities and start vocalizing their plans to walk the talk of equality within their respective organizations. Beyond the positive influences and while acknowledging how far we have come as a country, how much we still lag behind in gender equality is the fire that keeps burning my feminism and will continue making me vocal in each moment I witness a double standard and a violation.
The double standards conveyed in the warning of a female doctor that I ” must stop further educating myself, as I will intimidate potentials suitors.â€ Why not educate our men and boys to nurture healthier masculinities instead?
The double standards articulated by a well-meaning driver who shares with me that ” an Ethiopian man cannot handle you for you are educated and too independent. Trust me, I am one.â€ Why not challenge this narrative of Ethiopian men by doing what the status quo says is impossible?

The double standards expressed in a male employer’s actions of clamping down an idea when it comes from a woman staff member and in ” penis solidarityâ€ championing the same idea hijacked by a male colleague. Why not challenge our purely patriarchal institutions and brotherhood boardrooms?
My feminism is neither dogmatic nor purely theoretical. It is rooted in my every day encounters and experiences as a daughter, a sister, a friend, a lover, a gender equality advocate and trainer, and the plethora of roles I play. It is embedded in my vision for a just and equitable society that equally values the worth of women, our rights and our contributions as it does that of men. It is sourced in my evolution from girlhood to womanhood against the backdrop of a dominant cultural narrative that prefers that I am more accepting than I am questioning; more ” easyâ€ to be around than challenging; more ” realisticâ€ than equality seeking; more conforming than I am non-compliant to fulfilling traditional expectations of being a woman.
Although most times being vocal about feminism – advocating equal rights for men and women politically, socially and economical

ly – can alienate, what I find more alienating is going through this world witnessing gender injustices and not challenging at least one person’s assumptions.

No. Being vocal is not an easy way to live life. But I believe it’s the right way.
~~
Love & Light