“I was never taught absolute silence. I was taught that it was important to speak but to talk a talk that was in itself silence.” – bell hooks, Talking Back

In my context, women have done the normative exercise of behind-the-scenes-manoeuvring and decision making that is often overlooked even when it is a useful skill. A skill that I have, I should confess, often failed to learn.

Voice, in this context, is not necessarily an overt exercise. As you can imagine, this is in direct contradiction to the “revolutionary” or “confrontational” voice that may be normalized by my understanding of feminist resistance. However, I have learned that there is a fascinating, albeit hard to replicate for me personally, dimension to silence. I am talking about the often elusive silence of the overtly passive voice in exercising power within oppressive norms. When nothing gets done through head-on communication, it is all in the subtleties and perhaps cunning, that hits the spot.

As I reflect on my voice as an African young woman and look at the familiar words of “transcending”, “transient” and “transformative” in feminist literature on voice, I realize there is an indication of the constrictive state of our existence and identity as feminists. The shared experience is reflected in the need to emerge from a cocoon that held us prisoner, to emerge and soon. bell hooks looks at the “emergence to voice” as a revolutionary gesture on its own, as a critical juncture to emerge as subjects. She says “Only as subjects can we speak. As objects, we remain voiceless. Our beings defined and interpreted as others.”  This resonates at a very profound level.

Imagine walking into a room, any room of power and privilege, walking in with the conviction that you belong in that room. It is not a matter of self-motivation, nor is it a matter of confidence. When you walk into a room or use your voice, you do so with a real conviction that you are entitled to be in that room. You deserve to be heard. Not because you are special, but because you are just like everyone else. A human being with a voice that deserves to be heard. Period. But when you are relegated, forcefully, to be a silent audience, a willing aide but never an audible voice, the act of speaking out becomes a daily struggle.

“And when we speak we are afraid

Our words will not be heard

But when we are silent

We are still afraid

So it is better to speak

We were never meant to survive.”

I have come face to face with the patriarchy, with all the devious faces it wears and the hands and minds it uses as tools. The face was that of a petulant child, pretending to the throne of adulthood, entitled to all with very little grasp on reality. I have come face to face with the patriarchy and lived to tell the sordid tale. The most insidious roots of this system that follows us everywhere is the tirelessness with which it works to convince you of your worthlessness. Sometimes the tactics are subtle, sometimes the scars are deeply entrenched and sometimes it comes at you with such blatant aggression it becomes hard to ignore.

All this to convince us of the precarious whiles of a woman’s voice, to render all that is valued impossible, invisible and irrelevant. What does it mean to have a voice for a woman who is scared for her very being? Rather, take all there is to have agency and voice, just give me peace. That would likely be her reaction. If she dares question authority, raises issues that are deemed inappropriate, this brought pain that is not necessarily blatant or insidious but present nonetheless. This is for voices claimed, calmed through acts of sheer will and resistance unleashed. 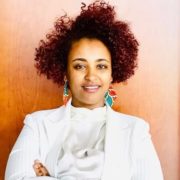 Sewit Haileselassie is a bold feminist with a background of economics, communication and gender studies. She’s a serial reader, critical thinker and analytical conversationalist.

0
Sewit Haileselassie February 12, 2020
No Comments Yet

Battling Endless Questions and No Answers

What is in a name & identity?

Breaking the Chains of Oppression by Women

Why You Should Know Awra Amba