I don’t know what your story is or where it starts, but one thing is for certain, you will bleed. I pray you bleed not at the hands of men or women, but that when you do you will not be ashamed of the monthly red monster that lurks in your knickers.

If there’s ever only 3 things that you can teach your daughters (and sons) may it be an affirmation that “Your Periods are not taboo. Period.” We need to talk about this situation that plagues women folk for the majority of their lives.

At this point we all know what a period is so there’s no need to explain that, but there is a need to demystify them and stop pretending it doesn’t happen because that makes life. When you consider that the average woman has more than 400 periods in her lifetime, this makes period talk a big deal.  We need to learn as a society to talk about the red elephant in the room.

There are a great number of reasons why this is a necessary topic for discussion. Firstly, talking about periods is the first step in removing stigma and discomfort surrounding this time of month, most especially when it comes to seeking medical attention and sanitary supplies.

Have you ever gone to a store to buy your pads, tampons or whatever it is you use and had it wrapped up in double bags, or a newspaper or a paper bag before it goes into an actual carrier bag? No? Then you’re one of the lucky ones.

Whilst I understand that this is done for the sake of privacy but Dear Shopkeepers, can we just acknowledge that these are products like any other (which we pay a lot of tax on) and should simply be treated as such? I mean you’re fine with displaying them in your store so why the sudden secrecy? (Just me? ok!) If women and girls could freely discuss periods, it would be easier to walk into a store and request the specific product you need. Sometimes you’ll find yourself using products you’re uncomfortable with just because you’re not able to request the specific one you need that makes the red experience much more bearable. So girl, you need to learn to be a bit more vocal so that you don’t short change yourself.

Our continent has a problem that we have to face – period poverty. So many girls miss school because they don’t have the necessary sanitary products they need to get through the month. This has, thankfully, seen the rise of innovations such as re-useable pads, with a number of organisations donating and organising girls clubs so they can teach women and girls how to make their own products. This is a step in the right direction that would not have been possible without someone starting the conversation.

The other reason we need to talk about this is it makes it a whole lot easier when you need to see a gynaecologist or a pharmacist because then you can express yourself properly. For some of us who have cramps from hell (Dysmenorrhoea), being able to discuss your period can literally save your life.

Having the kind of period cramps that can get you admitted and on drip, dehydrated and in agony because you’re being punished by your uterus for not giving it a child (yes, been there done that) has meant that I’ve had to be more vocal about periods. There’s no way to explain a) why I’ve been incapacitated for a whole day and I’m behaving like the walking dead and b) why I need a stronger cocktail of painkillers each month.

Speaking of painkillers, if you don’t speak up about your periods you’ll keep dying in pain with no relief. For example, in high school, the school nurse, whilst being aware that dysmenorrhea was a problem, would only be allowed to prescribe paracetamol so of course boarding school was a joy (scoffs). No amount of explaining that I was in excruciating pain and puking out my guts up for a good 12 hours straight each month would get me anything stronger to kill the pain.

Now, having learnt what meds work and don’t work have made life a lot easier, but it really took ending up on drip to understand that it was important for me to see a gynaecologist regularly and get advice on what would work for my pain.

Women suffer in silence because they either do not know, or do not have access to a conversational platform.

Because honestly that’s where it starts. With a conversation and that translates into action.

If I hadn’t been able to have a conversation about periods, I might not have known that I had a serious hormonal imbalance when I did last year. I wouldn’t have known that it could be rectified and then taken the necessary steps to do that. Thankfully I got linked to a very helpful gynae who made sure to keep monitoring my situation. The point is I wouldn’t have even had the guts to go see him and discuss my situation if talking about periods wasn’t a necessary thing.

Yes, the majority of us hate going to hospitals and clinics unless something major has happened and that’s the problem. Having dialogue about the seemingly unimportant natural things that we are plagued with can be detrimental to our health. So we need to do better, not only for us but other women and girls all around, so that they can get the courage to do so as well. Most especially if we have access to these services.

Not being able to discuss periods freely for the majority of our lives has meant that we’ve sometimes had to sit through listening to the most cringe worthy misconceptions about them from men and turn our heads the other way.

In case you’re not convinced here’s another reason we need to start normalizing period talk. In September, a 14year old Kenyan girl killed herself after she was period shamed out of class by her teacher after she stained herself. Why would you put a child through that? We lost a part of our future. A girl who had hopes and dreams, and was working towards achieving them.

Here’s something you might not understand, no matter what age you are, periods will make you self-conscious. Your body is going through so many changes. So on top of all that you have to deal with, imagine you get bullied (by an adult who is supposed to protect you) for a natural occurrence you have no power over. It’s unfair. So let’s talk about periods. Break the taboo, it will save a life.

Dear 21st Century Africans, girls, boys, women and men. I hope that this letter has helped open your eyes. A period shouldn’t be a shameful secret, a burden to be borne by the one bleeding. It’s miraculous to be able to bleed for so many days and not die, to bear such pain and still soldier on with school, work and chores and be everything that society demands for us to be. So when we take out a little time in the month to deal with our bodies please don’t make it harder for us than it should be. 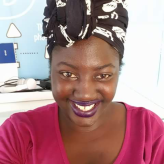 Confronting the Use of Defamation Suits to Silence Victims of Sexual Abuse.

Why We Must Continue Un-shaming Period Conversations

Overcoming the Social Stigma of Menstruation (by James Waruiru)